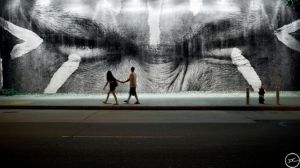 But Before we get in to the Movie, this is our journey, our voice.

DJ Two Bears and Chase Ironeyes of Last Real Indians got the chance to work with one of the world’s most amazing  Street Artist in the world JR, Who is JR you Ask: JR owns the biggest art gallery in the world.

He exhibits freely in the streets of the world, catching the attention of people who are not typical museum visitors. His work mixes Art and Act, talks about commitment, freedom, identity and limit.

After he found a camera in the Paris subway, he did a tour of European Street Art, tracking the people who communicate messages via the walls. Then, he started to work on the vertical limits, watching the people and the passage of life from the forbidden undergrounds and roofs of Paris.

In 2006, he achieved Portrait of a Generation, portraits of the suburban “thugs” that he posted, in huge formats, in the bourgeois districts of Paris. This illegal project became “official” when the Paris City Hall wrapped its building with JR’s photos.

In 2007, with Marco, he did Face 2 Face, the biggest illegal exhibition ever. JR posted huge portraits of Israelis and Palestinians face to face in eight Palestinian and Israeli cities, and on the both sides of the Security fence / Separation wall. The experts said it would be impossible. Still, he did it.

In 2008, he embarked for a long international trip for Women Are Heroes, a project in which he underlines the dignity of women who are often the targets of conflicts.

At the same time, he creates up the project The Wrinkles of the City. These actions aim to show through theirs wrinkles, the inhabitants of a city, the history and memory of a country. The artist chose the cities that have experienced changes such as Cartagena in Spain, Shanghai or Los Angeles.

In 2010, his film Women Are Heroes is presented at Cannes in competition for the Camera d’Or.

In 2011, he received the Ted Prize, which offers him the opportunity to make “A wish to change the world”. He creates InsideOut, an international participatory art project that allows people worldwide to get their picture and paste it to support an idea, a project, an action and share their experience.

JR creates “Pervasive Art” that spreads uninvited on the buildings of the slums around Paris, on the walls in the Middle-East, on the broken bridges in Africa or the favelas in Brazil. People who often live with the bare minimum discover something absolutely unnecessary. And they don’t just see it, they make it. Some elderly women become models for a day; some kids turn artists for a week. In that Art scene, there is no stage to separate the actors from the spectators.

After these local exhibitions, the images are transported to London, New York, Berlin or Amsterdam where people interpret them in the light of their own personal experience.

As he remains anonymous and doesn’t explain his huge full frame portraits of people making faces, JR leaves the space empty for an encounter between the subject/protagonist and the passer-by/interpreter.

This is what JR’s work is about. Raising questions…

So how DJ and Chase Got Involved: One of our Mutual Friends that we knew by the name of Sol Guy connected us with JR.

We (Sol, DJ, Chase) thought it would very important we tell the story of Native people on the Standing Rock Rez, as most of all of us know, media for some reason doesn’t always like to portray us in the positive light, and that was a spark for us to create Last Real Indians in the first place, to give the people a true voice, and as for JR he has the same concept give the people a voice, so JR and LRI was a perfect match.

This is our journey together: A Native American Lakota tribe participated in the Inside Out Project thanks to their Group Leader DJ Two Bears. They organized a Group Action on their reservation, in North Dakota, in May 2011. JR decided to help them by bringing their story to Manhattan, a former sacred ground for Native Americans, and creating large-size pasting installations all over New York to share their story.

The Inside Out Project is an ongoing global participatory art project started by JR, after he was awarded the 2011 TED Prize. Everyone is invited to use black and white photographic portraits to discover, reveal and share the untold stories and images of people around the world. Portraits are made into posters and sent back to the projectʼs co-creators, for them to exhibit in their own communities. People must participate in groups of at least 5, gathered around a common statement. Posters can be placed anywhere in the streets. Inside Out Photobooths allow people to participate immediately. These exhibitions are documented, archived and available online at www.insideoutproject.net. As of December 2012, over 120,000 posters were printed and sent to more than 108 countries, for a total of over 4,000 projects.

As Inside Out project wrapped up with the TED Prize 2011, DJ Two Bears Attended The TED Conference 2012 in Long Beach CA as JR gave his last speech as the TED Prize Winner, DJ was in the crowd watching the speech and in DJ own word: “I got tears in my eyes as we got to the paste’n we did on the Standing Rock Rez, as I grown up there my whole life, I got to see where it on the big stage, with a positive story to it, I was so proud to be Native and did my best to Represent all natives there”.  here is the TED Talk speech with photos of standing Rock Proud moment for Two Bears.

And this leads us to now, with all the series of events thought our the past two years, the project in NYC will continue, we will continue to paste Natives Up, and let the world know we are here and not going anywhere, we are still powerful as ever.

Inside Out Movie: This fascinating documentary tracks the evolution of the biggest participatory art project in the world, the wildly popular ‘INSIDE OUT’. Travel the globe with French artist JR as he motivates entire communities to define their most important causes with incredibly passionate displays of giant black and white portraits pasted in the street. We witness young and old taking ownership of walls that were previously restricted and in doing so testing the limits of what they thought was possible. In capturing the process, Alastair Siddons creates a glowing testament to the power of image and the role that art can play in transforming communities.

An official Documentary Feature Spotlight selection at the 2013 Tribeca Film Festival, the film will premiere at the debut exclusively on HBO on Monday, May 20th at 9pm ET/PT.