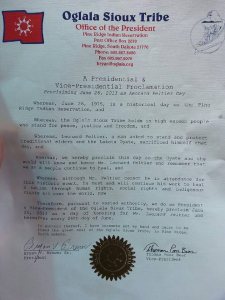 Today, the Oglala Sioux Tribe, proclaimed June 26th as Leonard Peltier Day. Leonard Peltier, a member of the American Indian Movement, is being honored for heeding the call of traditional elders to stand and protect the Lakota Oyate during the 1970’s. Peltier is currently serving two consecutive terms of life imprisonment, for a crime that he did not commit, for a shoot out with FBI agents that took place on the Pine Ridge Reservation in 1975.

Amnesty International, the Southern Christian Leadership Conference, National Congress of American Indians, the Robert F. Kennedy Memorial Center for Human Rights, Archbishop Desmond Tutu and Rev. Jesse Jackson, among many others, consider Leonard Peltier to be a political prisoner and have called for his immediate release.

Whereas, June 26, 1975, is a historic day on the Pine Ridge Indian Reservation, and

Whereas, The Oglala Sioux Tribe holds in high esteem people who stand for peace, justice and freedom, and

Whereas, Leonard Peltier, a man asked to stand and protect traditional elders and the Lakota Oyate, sacrificed himself that day, and

Whereas, we hereby proclaim this day so the Oyate and the world will know and honor Mr. Peltier and remember that we as a people continue to heal, and

Whereas, although Mr. Peltier cannot be in attendance for this historic event, we must and will continue his work to heal a nation through human rights, social justice and indigenous rights all over the world, now

Therefore, pursuant to vested authority, we do as President and Vice President of the Oglala Sioux Tribe, hereby proclaim June 26, 2013 as a day of honoring for Mr. Peltier and hereafter every 26th day of June. 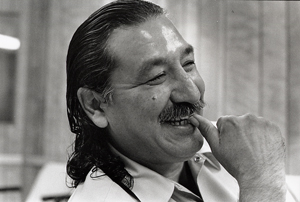