Mitakuyepi, cante wasteya nape ceyuzapelo. My relatives, I shake your hands with good feelings in my heart.

A friend once shared with me that the protection and restoration of our Native languages is perhaps one of the most important issues that we, as Native peoples, needed to address. Our Native languages are so central and essential to understanding and knowing who we are as a people that losing our languages are the equivalent to a spiritual and cultural death.

For the past twelve years I have been learning my own Lakota language. I have gone through countless language books, DVDs, CDs, on-line programs, as well as, listening and learning from Lakota language speakers. Despite the number of years “learning” the Lakota language it was not until more recently that I was able to start to grasp the magnitude to what my friend had shared.

A few years back, I had the opportunity to hear Debra White Plume speak at a local community college. Throughout her presentation she shared stories about our Lakota language and in particular the deeper root meanings of different words. Ate (father), deeper meaning shoulder to lean on. Mni (water) deeper meaning, and literal translation, life. She shared how the word Wasicu (fat taker) came to be. As she spoke, I was literally transfixed by the stories she shared that described our language that in turn described our worldview.

Our Native languages have power and embedded in our languages are our spiritual beliefs, worldviews, and instructions in how to live in relation with all our relations. Roles and responsibilities are defined by and within our languages.

The incredible, and recently departed, Albert White Hat Sr, who committed his life to Lakota language and cultural preservation, wrote extensively about the teachings and deeper meanings behind our language. For example, in his Reading and Writing the Lakota Language he discusses the root word Hca, which means complete; exact; true. Final growth. End result.

The root word Hca can found in all the different Oyate (Nations) plants (wanahca), animals (tahca), and human (winuhca and wicahca). He expands this by describing the different stages of our lives from infancy to elder and explains that one moves on to different stages in life not simply by growing older, but by gaining or accomplishing new attributes, such as wisdom, bravery, humility and so on. In this perspective one could stay essentially a “boy” or “girl” well into adulthood. This is a perfect example of our Lakota worldview regarding the roles and responsibilities we are to strive for as we progress through our life.

While we can begin to grasp the essentialness in which we need to protect and revive our Native languages, we are often faced with the dilemma on how to accomplish it. A century of boarding schools and the persecution of our languages, and traditional cultures, have left a tragic wake for communities wanting to revive and speak their traditional tongues. Compounding the impacts of boarding schools and forced assimilation are the grim realities that some tribal communities have lost all, or nearly all, of their traditional language speakers. Further, even in communities where language survival is a viable reality, many simply choose to give into the English speaking world or choose to not make Native language survival a priority.

So what strategies can we utilize to protect and revive our Native languages? First, we must be willing to make language survival and revival a top priority with the understanding that it is a long term commitment.

After twelve years of learning our Lakota language, I feel I have an elementary understanding of speaking and understanding at best. And I’m ok with that, because what I’ve learned I’ve been able to pass along to my wakanyeja (children; literal translation sacred beings) who at their young ages have been able to soak up the language much easier, and faster, than myself.

Perhaps the most important strategy of all in reviving our languages is to make a commitment to teaching to our young ones from an early age. The years between birth to five have repeatedly been cited as the most important years in ones development. Their minds are like literal sponges that soak up the world around them. Our youngest, who’s now six, has heard and been around our Lakota language for most of his life and consequentially he both comprehends and speaks it the most out of all of our other wakanyeja. For him, there are certain names and sayings that he knows only in Lakota.

This leads to another strategy, when we our developing programs, curriculums, apps, videos, and so on we should develop them for our birth to five learners with the mind-set that our wakanyeja are Native speakers first, English second. This way they can grow up thinking and speaking in their Native tongue. For example, when they are learning colors teach them how to say the colors only in their Native language.

One effective way to promote speaking is to learn common everyday language (hello, how are you, are you hungry, go away, etc) and speak it daily. The non-profit Oceti Wakan based in Pine Ridge uses this model in their Guiding Your Child in Speaking the Lakota Language series; where they promote families learn to speak just two Lakota phrases per week per school year. Once phrases are learned, families are encouraged to only use those phrases in their everyday speech.

In our home, we adopted this strategy and the results have been phenomenal. To learn our weekly phrases, and vocabulary, I purchased some index cards where I would write the phrase, and/or word, on one side and let my wakanyeja draw a picture on the other. This is a fun, easy, and inexpensive way to promote learning and speaking our languages in the home. 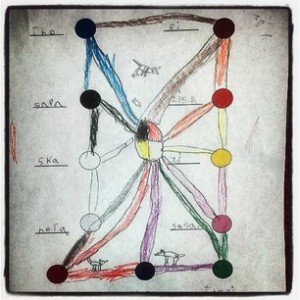 Another area to be strategic around is to not be overly critical of our language learners, especially when they are first starting to learn. Nothing will put a stop quicker to someone wanting to speak and learn their language then by being constantly corrected every time they mispronounce a word, or do not speak “grammatically” correct.

When our wakanyeja are young and first learning to speak English, we do not correct them every time they say a word wrong or do not speak it grammatically correct, we shouldn’t do this to our own Native language learners as well. If you’re going to correct someone, say for using the wrong gender term, do so in a loving supportive way and be sure to never embarrass or shame them.

Tribes too could help lead the way in language revitalization. They could prioritize funding immersion schools/programs, put language teachers in schools, change signage (stop signs, bathroom sign, etc) from English to their respective Native languages, require tribal employees take language courses, and so on. For signage, there is no reason why every restroom on the rez couldn’t change the boy and girl signs from English to their words for boy and girl, same for stop signs and other highly common signs. 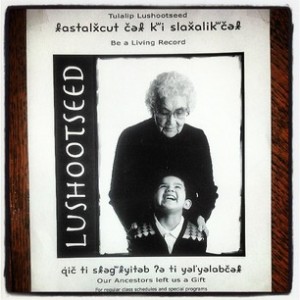 Using technology is also another vastly important area to utilize for Native language instruction. Phone apps, YouTube videos and web based children’s games are but a few of the creative ways technology can be integrated. Our Tribal colleges could look into offering language courses on-line. This could help to reach those who are unable to either attend courses due to work, or other scheduling conflicts, or for those who live far away from the colleges.

For the revitalization and survival of our languages to work, then our communities and young ones must be able to engage with the language both visually and audibly. We need a variety of tools at our disposal to use to save and grow our Native language learners and speakers. No one way, or method, is going to work for every person, so it is up to us to be creative in finding the means to engage all our community members.

Lastly, let us not forget that the eradication of our Native languages not only brings about spiritual and cultural loss, but the elimination of our languages has been central to colonial and genocidal efforts. The colonizer wants us to forget that we are originally free peoples who had our own forms of governance, spirituality, ways of living and languages. Eradicating our languages is a means to eradicating who and what we are as Indigenous peoples.

“Teaching an Indian youth in his own barbarous dialect is a positive detriment to him. The first step to be taken toward civilization…is to teach them the English language.”

Ultimately, if we are to ever be successful in our efforts to decolonize ourselves, families and communities then language revitalization must be central in those efforts. Thinking in English leads to thinking and acting like the colonizer. The impacts of genocide and the colonial tactics to eradicate who and what we are runs deep and we have now reached a point where critical efforts and action are needed if we are give back to our future generations what our ancestors gave us, a beautiful way of living and being as a relation to all our relations.