Perhaps one of the fastest, fun and easiest ways to promote Native language learning, comprehension and retention is through the use of songs and singing.

Several years ago, I had the opportunity to attend a Yakama language workshop at the annual Washington State Indian Education Association conference. The presenters were highlighting an after school Yakama language program recently started at one of their elementary schools. Presenting with the program director were several of the students who attended the program. The young students told us they wanted to teach us a song that they sing at the start of every after school session.

The song, sung to Barney’s dreaded by parents everywhere tune, was translated into Yakama and was surprisingly easy to pick up, perhaps because the tune is such a familiar one. As I sat there listening to other adults being taught the Yakama language through song, I got my pencil out and made my attempt to “Lakotaize” the song. Back at the hotel room, later that night, I taught my wakanyeja (children) the song in Lakota and all three had it memorized in a mere matter of a few tries.

Here is our youngest, Čaƞté Tadashi, singing our Lakotaized version of the Barney song (Lakota speakers the song is done with male gender endings).

How are you?
I am good
Because we are here my heart is good
See you again

Have fun and be creative coming up with your own Nativized version of the Barney song. 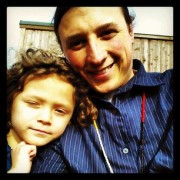