Finding accurate portrayals of Native people on any media format is often a difficult task to accomplish. In the world of sports where any deviation from the norm seems to be both a marketing opportunity and a chance to exploit, the Professional Golf Association has quietly employed two Native Americans as knowledgeable experts, unique personalities, and not as caricatures.

I have tried my best to separate sport from the political realities of our world but with the transcendent power of athletic competition and the 24-hour news cycle it is inevitable that the political and the sports worlds will occasionally overlap. Although I am opposed to the use of Native themed mascots in sports, I remember experiencing a feeling of annoyance with the #notyourmascot twitter storm during the Super Bowl. Selfish? Yes. Were the Broncos losing? Yes. It could have been either or that set my nerves on fire I suppose.

I just wanted to remove myself from the political realities of the day and watch my Broncos return to the Super Bowl while at the same time complaining about the refs on Twitter of course. You see, part of the beauty of being a sports fan is both the metaphysical jubilation we feel when our sports heroes triumph and the shared feelings of trauma we inevitably encounter as we suffer through defeats with them as well.

For us as fans, sports are both an escape away from our everyday taking our conscious in to an alternate reality –even it is interrupted by commercials every few minutes. On this rare occasion of my beloved Broncos playing in the Super Bowl the last thing I wanted was for politics to play a part in holiday that I may never see again in my lifetime.

Although I wanted to blame those who had started the Twitter storm for invading my happy place, I quickly realized that it was the NFL who was to blame and not my friends who were ruining my Broncos Twitter feed with Dan Snyder disses.

The NFL has obviously been the worst example of modern day ignorance in regards to displaying knowledge of who we are as Indian people today. Other sports have done a better job. The WNBA has been on point with their promotion of Shoni Schimmel, but to be fair to Shoni, even if she wasn’t Native, her play would have garnered her national attention regardless. One sport gets it however and it is probably the last one you would have expected: Professional golf.

Yes, that professional golf. The same game that is played by people in funny clothes, on expensive courses, and in parts of the world where it would be difficult to find a Native in the first place. 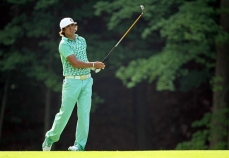 There are a ton of Natives out there who play the game of golf but if you are not an avid sports fan you may have missed that two of the faces of modern golf are Native American. Notah Begay, who is a former PGA tour pro, is now an analyst for the Golf Channel, and Rickie Fowler, one of the fastest rising stars in all of sports and a fixture on the final round of nearly every major tournament are both Navajo. Although some may argue that the PGA should do more to market the fact that they are Native American I can appreciate the fact that promoters of the game are allowing their talent and accomplishments to speak for themselves.

Both Fowler and Begay are allowed to carve out their own space to be themselves as people and talents who just happen to be Native American, not the other way around. Sometimes, simply existing and succeeding as a person is a powerful statement in itself.

*This article was first published in the Native Sun News

Brandon is an enrolled member of the Oglala Sioux Tribe who earned his education at Dartmouth College. He is the managing editor of Native Sun News and a contributor to LastRealIndians.com. He has been published globally and also works as the Life and Current events editor at Native Max Magazine.