On June 17th, the Seattle school board voted unanimously to rename the Wilson Pacific school to the “Robert Eaglestaff Middle School.”

Robert (Bob), who tragically passed away in 1996 at the age of 43, was well known to many in and around the Seattle Native community for his tireless work in Indian education. He helped to guide Seattle’s Indian Heritage School into a model inter-tribal program that stressed both academic rigors with traditional cultural values. In addition to his work in Indian education Bob, from Standing Rock, was a legend on the basketball court who was inducted into the University of North Dakota’s Hall of Fame in 2004.

The decision to rename Wilson Pacific, the former site of Seattle’s Indian Heritage School, came through a grassroots community effort from Seattle’s Native community. For more on Robert Eaglestaff and his legacy in Seattle read: Honoring Robert Eaglestaff by Matt Remle 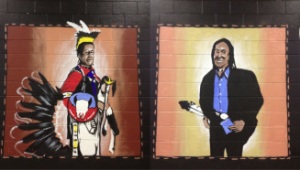