Joining Juarez in another Seattle first, was the election of Scott Pinkham (Nez Perce) to the Seattle School board.  Pinkham is believed to be the first Native American elected to serve on the school board.

North of Seattle, in Bellingham, Roxanne Murphy (Nooksack) was re-elected to the Bellingham City Council.  In 2014, Murphy sponsored the “Coast Salish Day” resolution to replace the Federal holiday Columbus Day for the city of Bellingham. 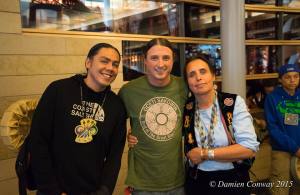 Matt Remle (Lakota), center, is an editor and writer for Last Real Indians and a community organizer. Photo by Damien Conway.