On November 24th, the late Billy Frank Jr. (Nisqually) will be one of 17 people to be awarded with the Presidential Medal of Freedom.  The Presidential Medal of Freedom is the Nation’s highest civilian honor, presented to individuals who have made especially meritorious contributions to the interests of the United States, to world peace, or to cultural or other significant public or private endeavors. 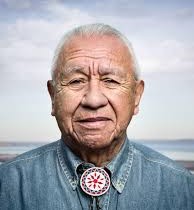 The President’s announcement said: “Billy Frank, Jr. was a tireless advocate for Indian treaty rights and environmental stewardship, whose activism paved the way for the “Boldt decision,” which reaffirmed tribal co-management of salmon resources in the state of Washington.  Frank led effective “fish-ins,” which were modeled after sit-ins of the civil rights movement, during the tribal “fish wars” of the 1960s and 1970s.  His magnetic personality and tireless advocacy over more than five decades made him a revered figure both domestically and abroad.  Frank was the recipient of many awards, including the Martin Luther King, Jr. Distinguished Service Award for Humanitarian Achievement.  Frank left in his wake an Indian Country strengthened by greater sovereignty and a nation fortified by his example of service to one’s community, his humility, and his dedication to the principles of human rights and environmental sustainability.”

Last Real Indians editor and contributing writer Matt Remle wrote this about the legacy of Billy Frank Jr.: “It is difficult to put into words the profound significance and role Billy Frank Jr played in asserting tribal sovereignty and in defense of Mother Earth and all of her creation.  As a young boy, in the 1940’s, was the first time Billy was arrested for salmon fishing a scene that would be repeated some 50 times between the 1940’s-1970’s during the so-called “Fishing Wars” in Washington State.  The actions at Frank’s Landing would later influence the pro-treaty ruling dubbed the Boldt decision of 1974, which affirmed the tribes treaty right to fish in “usual and accustomed” fishing areas.”

Billy Frank Jr (posthumous) will be one of seventeen people honored at a White House ceremony on November 24th.

Matt Remle is an editor and writer for Last Real Indians and LRInspire.