Learning to Speak Ojibwemowin (Ojibwe) Dagoshing.  Here are some phrases for a favorite activity among immersion school parents: getting bossy with your kids!  These are useful for coming inside and going outside.

All of these verbs are in the form of commands, otherwise known as the imperative form.  For #6, you’ll notice that the verb changes to biizikaw while the rest are biizikan.  This is because mittens, in our language, are animate nouns, while the other clothing items are considered inanimate nouns.  Animate nouns require animate verb forms, to show that the action is happening to a being and not merely a thing.

You will also notice that giizikan is the opposite of biizikan.  Giizikaw is also the opposite of biizikaw, so all of these sentences can be switched from putting on clothes to taking off clothes. If you are so inclined, it is easy to use these phrases with dolls.  I remember putting together a paper doll activity where I cut out items from construction paper and labeled them all in Ojibwemowin.

If you are bossing around more than one person at a time, in most cases you only have to switch the –n ending to a –g.  For example, someone may say “Biindigeg!” to a group of people, or “Biizikag” to more than one child.

In that last phrase, you will see the English says “We (inc).” In Ojibwemowin, we have two forms of “we” and “us.” One form of we includes the person you are talking to.  This allows for a greater clarity of meaning than in English, for example, you might say to someone “We are going to the store” and it remains unclear if you are including the person or not. Giga-izhaamin includes the listener, while niga-izhaamin or inga-izhaamin would literally mean, “We, but not you, are going.”

Ojibwe is a Central Algonquian language spoken by the Anishinaabe people throughout much of Canada from Ontario to Manitoba and US border states from Michigan to Montana. It is centered around the Great Lakes homeland of the Ojibwe people. 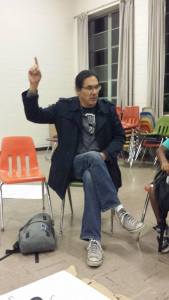