On Tuesday, July 26, 2016, the US Army Corps of Engineers (“USACE”) approved the water crossing permits for the Dakota Access Pipeline, proposed to carry fracked oil from the Bakken fields in North Dakota 1,172 miles to Patoka, Illinois. We are a grassroots coalition of tribal members, landowners, and environmental organizations who stand united in opposition to these permits and the process by which the USACE granted them. This rubber stamp approval undermines the Clean Water Act, the National Environmental Policy Act, the National Historic Preservation Act, and the Native American Graves Protection and Repatriation Act, as well as federal trust responsibilities guaranteed in the 1851 and 1868 United States treaties with the L/D/Nakota tribes, which remain the supreme law of the land. We support the subsequent legal filings by the Standing Rock, Cheyenne River, Rosebud Sioux, and Yankton Sioux Tribes,whose human rights, treaty rights, and sovereignty are violated by these permits. We join themin calling for a full halt to all construction activities and repeal of all USACE permits until formal tribal consultation and environmental review are properly and adequately conducted.

We dispute the USACE claims of proper consultation with Tribal nations. The three formal letters issued by federal agencies in April also severely criticized USACE’s lack of consultation with tribal nations regarding the pipeline project, as required by federal law. Formal nation-­to-­nation consultation requires the establishment of protocols, consistent in­-person meetings, and the use of unique cultural and local knowledge about potential impacts. Instead,the USACE simply sent letters informing the tribes of the company’s plans ­ in no way, shape or form a formal consultation. Standing Rock fought back and received one pre­consultation hearing in which they were allotted just two hours to give input. The Yankton Sioux Tribe repeatedly asked for formal consultation with the USACE and was ignored.

We dispute the USACE’s use of Nationwide Permit 12 to approve these water crossings. The USACE used Nationwide Permit 12 to improperly segment this project and circumvent critical laws designed to protect the public by assessing cumulative impacts posed by the entirety of the project. This method of fragmentation allows the Army Corps to rubber­stamp major pipeline projects without adequate environmental review or opportunity for public participation as required by federal law. The Clean Water Act’s general permit program was intended for projects with minimal environmental impacts, such as boat ramps, mooring buoys,and recreational facilities. It was not intended for massive interstate pipelines that transport hazardous materials and pose grave risks of leaks, spills, and explosions.

We dispute the USACE Finding of No Significant Impact on the many cultural sites that this pipeline threatens, including the village sites, burial grounds, and historic Sundance grounds in the immediate vicinity of the Missouri River crossing at Lake Oahe. Their assessment was limited to 27 sites identified without consultation with knowledgeable parties, and in direct contradiction of recommendations made by the Standing Rock Sioux Tribe’s Section 106 Historic Preservation Office. There were no new exploratory surveys conducted with tribal consultants ­ Dakota Access instead cited ‘Class I Literature’ and ‘ACOE Class III surveys’. This process did not allow for discovery of potential sites.

We dispute the USACE’s claims of “no disproportionate impact on marginalized communities,” outlined in their Environmental Assessment. This finding was based on impact analysis within an arbitrary half­mile radius of the crossing, ignoring the simple fact that the Missouri River flows in one direction and provides the drinking water for much of the Great Sioux Reservation. The USACE concluded that since there are non­tribal water intake valves closer to the Lake Oahe crossing than the Standing Rock Sioux Tribe’s intake valves 1.5 miles downstream, there was no disproportionate impact on Native people and that chosen location.

We dispute the manner in which the “No Build Alternative” was considered in the USACE permitting process. In their environmental review, the USACE did consider a “No Build Alternative,” but always founded upon the assumption that the goal of this project must be achieved. This is a fundamentally false premise. We reject the assumption that corporations have a right to operate that trumps human rights and the rights of nature. With an active rig count in the Bakken oil fields down over 85% relative to its peak two years ago due to low oil prices, there is not even an economic need for this pipeline. And more importantly, there is now unprecedented international consensus that in order to minimize the catastrophic ecological and human casualties caused by climate change, we must leave fossil fuels in the ground.

We stand in solidarity with the four tribal nations filing lawsuits against these permits, and with the communities from North Dakota to Illinois facing devastation from this pipeline and fighting to defend themselves, future generations, and Mother Earth. We call for a full halt to all construction activities and repeal of all USACE permits until formal tribal consultation and environmental review are properly and adequately conducted. 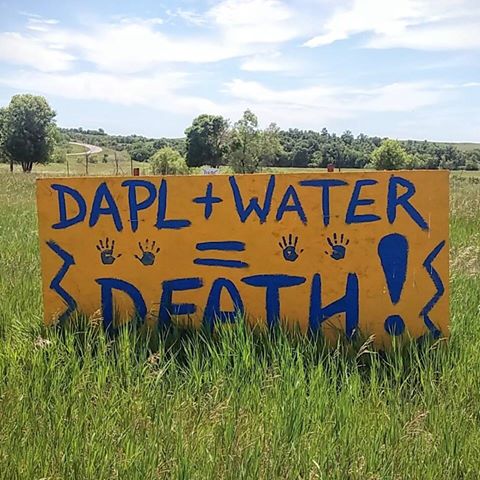