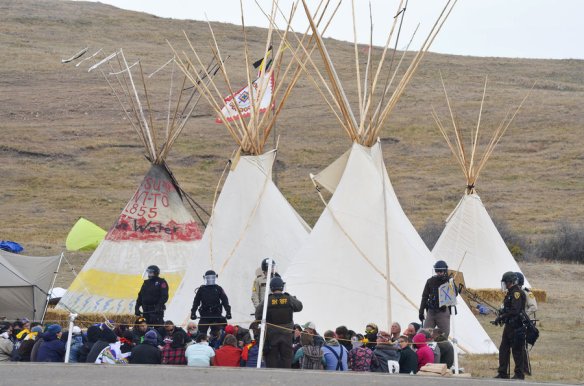 “The actions by law enforcement in North Dakota are shocking and the NCAI community is at a loss trying to grasp the events of [Thursday]’s attack on protectors gathered to defend water rights, lands, and sacred places.

We are working closely with the Standing Rock Sioux Tribe as they strive for peace during this difficult time. The Army Corps has a tremendous amount of responsibility for this conflict.

Despite federal laws and Executive Order, the permitting process for the Dakota Access Pipeline was anything but transparent, tribal consultation did not occur, and even the Department of the Interior’s concerns over tribal water supplies and cultural resources were ignored.

We call on the Army Corps of Engineers to deploy an immediate “stop order” on the Dakota Access Pipeline, deny the easement, and conduct a full environmental impact study.

We also call on the Department of Justice to take immediate steps to ensure the safety of thousands of Native protectors and allies. We will not stand for the continued violation of our First Amendment rights and Tribal Sovereign rights. Enough is enough.”

Matt Remle is an editor and writer for Last Real Indians and LRInspire. Follow @wakiyan7