On Wednesday, November 16, 2016, just hours after the arrival of the drill at Standing Rock, Dakota Access LLC filed a lawsuit against the U.S. Army Corp of Engineers for delaying its decision on the last required easement. Standing Rock Sioux Tribal Chairman Dave Archambault said in response, “They are wrong and the lawsuit will not succeed. We are looking forward to discussing the easement with the Administration and explaining why it must be denied.” In their court documents, the company said that delays have already cost nearly $100 million and that “further delay in the consideration of this case would add millions of dollars more each month in costs which cannot be recovered.”

This desperation comes from the company’s January 1, 2017 deadline for completing the project. Dakota Access has previously told the District Court that if they are not delivering oil by January 1, their shipper contracts will expire and the project will be in jeopardy. A new report by the Institute for Energy Economics and Financial Analysis, and issued just as the company’s lawsuit was being filed on Wednesday, confirmed these weaknesses in the financing of the project and questioned its entire economic rationale.

The report, “The High-Risk Financing Behind the Dakota Access Pipeline: A Potential Stranded Asset in the Bakken Region of North Dakota,” describes why Dakota Access is pushing so hard to meet its January 1 deadline. If it does not, producers and shippers who signed contracts two years ago committing to use the pipeline will then have the option to renegotiate the terms of those contracts, or even terminate them.

Producers and shippers may well want to do that, because oil prices plummeted soon after the contracts were signed in 2014, and the economics of Bakken drilling are dismal now in comparison. Production has declined dramatically and continues to decline more each month, with no end in sight. As a result, there is no real need for the Dakota Access pipeline, because the existing pipelines out of the Bakken, combined with the capacity of local refineries, more than meet the demand of producers wanting to get their products to markets. And that doesn’t even take into account the fact that some shippers will always choose rail because rail lines serve destinations that pipelines cannot.

In other words, Bakken infrastructure is already overbuilt, so shippers do not need the Dakota Access pipeline, and depending on the details of contractual terms, may well be interested in renegotiation with DAPL or even terminating their purchase agreements. This would put the project at risk of becoming a stranded asset, even before construction is fully complete.

On Thursday, November 17, the largest bank in Norway, DNB Bank, announced that it would sell its assets in the project, in response to a groundswell of popular pressure asking them to divest. They have yet to withdraw their loans from the project, which make up a substantial portion of the overall project financing, but have said they are considering doing so.

Meanwhile, water protectors continue to shut down construction sites and supply yards, and confront the man camps that often serve as hotbeds of violent crime and sexual trafficking, which disproportionately affects Native women and girls. As the police and vigilante violence continues in response, with many more brutal arrests this week, more and more companies and banks may begin to see the light and move to the right side of history.

by the Sacred Stone Camp 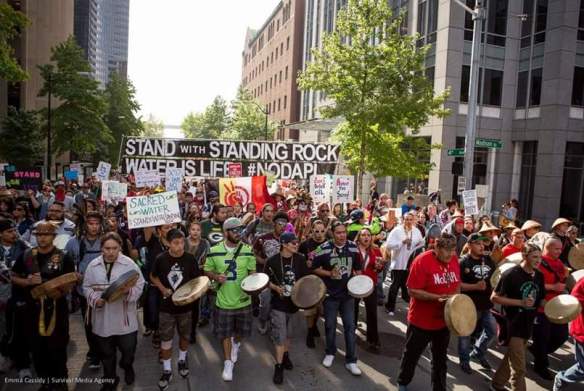