Cannnonball N.D. – Following last week’s decision by the Department of the Army to not grant the easement under Lake Oahe, we are all focused on important actions that must be undertaken in the coming weeks. The announcement cited need for further examination of key issues, including treaty rights. It was suggestive of a reroute, and indicated that there will be an Environmental Impact Statement initiated to review the crossing. We look forward to this process getting underway.

This past Friday, we had a status conference in federal district court to handle scheduling and procedural matters. The day after the decision was announced Dakota Access filed a motion for summary judgment, arguing that they already have all necessary permissions to cross under the Lake. This argument is legally flawed and we believe that the motion will be denied upon appropriate review. Judge Boasberg made it clear that the issue raised by Dakota Access will not be decided at least for many weeks. In the meantime, Dakota Access does not have permission to drill under Lake Oahe.

In addition, there was also a meeting with federal officials regarding the initiation of the EIS. When the process is initiated, it will be published in the Federal Register as a Notice of Intent to Prepare a Draft Environmental Impact Statement. We will then enter a period of determining both the scope of the EIS and who the cooperating agencies will be—federal, tribal, and state parties with an interest in the project.

It is extremely important that the EIS process begin immediately and I ask that all of our supporters are attentive to the proceedings. We must have confidence but ensure that this time around, the process works for us instead of against us.

I continue to welcome a meeting with President-elect Trump and his Interior nominee, Rep. Cathy McMorris Rodgers. Nevertheless, it is imperative that we push through as much as we can under the current administration. We cannot afford to lose momentum and continue to be on edge due to the Dakota Access presence at the drill pad. We also urge you to contact the banks investing in this risky and unsafe project to make them aware of the terrible acts this company has committed and reconsider their financing. Also, I ask all water protectors to make plans to return safely home when the weather permits, avoid conflict, and pivot your advocacy to holding the government accountable with respect to the EIS and our court battles. This is far from over. 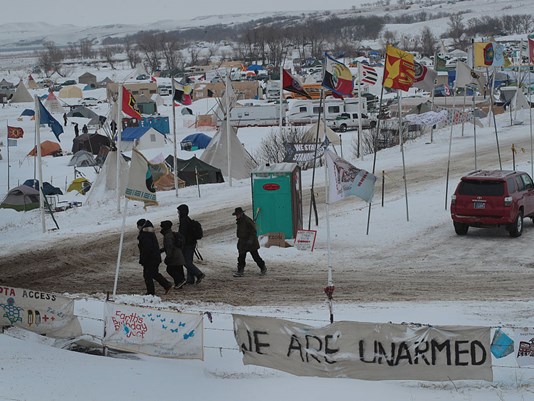