On Monday December 12th, the Senate of the United States passed the Water Resources Development Act (WRDA) of 2016, also referred to as the Water Infrastructure Improvements for the Nation Act, clearing the way for the Ancient One, also known as the Kennewick Man, to be returned to the Tribe’s for reburial.

For more than 20 years, Columbia Basin tribe’s have battled to have the remains of the over 9,000 year old Kennewick Man returned for reburial. Discovered in 1996, Kennewick Man, who is among the oldest and most complete skeletons found, has been subject to great controversy as Tribe’s sought to have the ancestor returned and the science community wanting to conduct studies on the remains.

Last summer, scientists at the University of Chicago affirmed what Tribe’s had long said, that the Kennewick Man was genetically related to Tribe’s of the region.

The following statement from JoDe Goudy, Chairman of the Yakama Nation Tribal Council:

“We come from this land and when we pass, we return to this land, as our relative the Ancient One did more than 9,000 year ago. Now with the help from our friends in Congress, he will be returned so that he may finally rest. I, and many others, wish this fight had not taken 20 years as this has been a long and tumultuous journey. This is the culmination of so many individuals’ work including some of our relatives who have passed on and returned to our Mother Earth. As they, along with the Ancient One rejoice in spirit, we humbly give thanks to our Creator that this day has come to pass. We respectfully await the work that is before us in the fulfillment of our way of life, and the return of our relative so that he may peacefully rest.

Senator Patty Murray introduced the original bill and was joined by other Senators from Oregon and Idaho. Congressman Denny Heck introduced the original House Bill and was joined by every member of the House from the State of Washington as well as by members from as far away as Oklahoma, Minnesota, Alaska and Michigan. The amendment was added to the WRDA Bill in the House through an amendment sponsored by our own Congressman Dan Newhouse. Thank you to these members of Congress for their support on this matter of great importance to the Yakama people.” 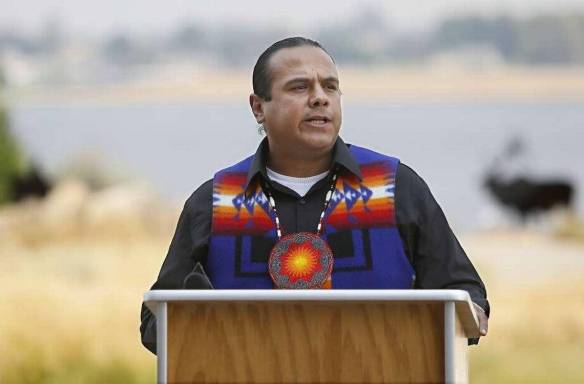 2 thoughts on “Ancient One Returns to Tribes”