On January 1st, 2017, during the Vikings/Bears football game at the Minneapolis US Bank Stadium, two water protectors rappelled from the rafters to display a large banner urging US Bank to divest from the Dakota Access Pipeline. They held space in this prime real estate for the duration of the game, with some livestream videos reaching over one million views.

The next day in Los Angeles, hundreds of water protectors took the street after the Rose Parade with a human-powered float and 150-foot-long black pipeline in Los Angeles. This follows the recent month of #NoDAPL action which had events planned for every single day of December, including the unveiling of this ‘Water is Life’ billboard in Times Square. According to a counter on DefundDAPL.org, individuals have pulled over $40.5 million from the various banks that back the project.

US Bank has $1.75 million in credit lines to Energy Transfer Partners (ETP), a parent company of the Dakota Access Pipeline. Two major Norwegian investors have already sold their assets in the project while others have promised to divest if DAPL fails to “respect the Standing Rock Sioux Tribe’s demand to not lay the pipeline near their reservation”.

Several cities are joining the movement to divest from banks funding DAPL and fossil fuels at large. Seattle recently introduced legislation that would end the city’s $3 billion contract with Wells Fargo while Boulder, Portland, and Minneapolis have publicly announced similar considerations. 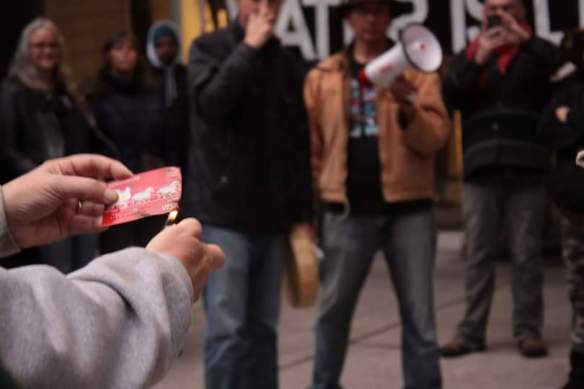 About one thousand water protectors remain in the Standing Rock encampments and continue to face brutality at the hands of local law enforcement as they pray and monitor pipeline construction. On Friday, a SWAT team fired nonlethal ammunition at a crowd of more than 100 people assembled on the blockaded bridge of Highway 1806. Five were arrested.

According to a study by the Institute for Energy Economics and Financial Analysis, every additional month of construction costs Energy Transfers Partners US$4.5 million, and now that it has passed the January 1 deadline for completion, they may lose an extra US$913 million. As the pipeline remains incomplete, ETP has violated the terms of their business contract and the companies that agreed to ship oil through DAPL now have the right to withdraw from the project.

Tara Houska of Honor the Earth said, “Last Wednesday, several of us held space in a Wells Fargo bank to educate people on how and where their money is being invested. This follows numerous shut downs, lock downs, etc. that have occurred all over the country. As we head towards a Donald Trump presidency and overt corporate control of the federal government, we must focus on local governance and grassroots organizing. Dakota Access is feeling the pressure — without our money funding the investors, this destructive project dies. Together, we will not be defeated.”