On April 1st, 2016 the Sacred Stone Camp was erected to oppose the construction of the Dakota Access pipeline. The camp, along with the Oceti Sakowin Camp, helped bring global awareness to Indigenous peoples and the fight against environmental racism, protecting treaty rights and water protection.

While the camps were cleared by a joint force of police, National Gaurd, Dept of Homeland Security, and other agencies, their global impact is undeniable.

While Sacred Stone Camp was not the first of its kind, a spirit camp was erected on the Rosebud Sioux reservation to oppose the Keystone XL pipeline and the Unist’ot’en Camp has been in existence for years, it helped to propel global aweness on Indigenous issues and motivated thousands to take action against the Dakota Access pipeline.

The Dakota Access pipeline is, of course, just one of many pipelines proposed to cross Tribal lands and waterways that is being opposed by Tribal communities and others. 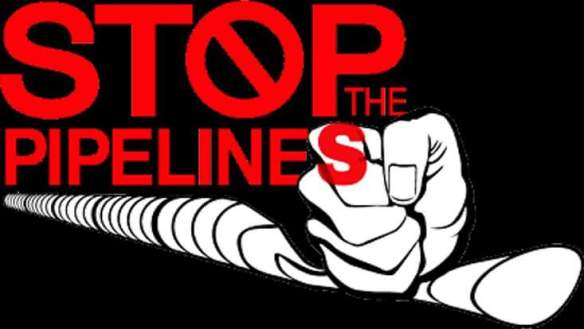 Below is a list pipeline resistance camps compiled by the Unist’ot’en Camp.

And soon, there may be a camp against Trans Mountain Kinder Morgan pipeline in Secwepemc Nation Territory, Canada

Across Turtle Island, these camps are a part of the continued resistance to Western colonization, as Tribal Nations battle to protect treaty rights, medicines, traditional foods, spirituality and Ina Maka (Mother Earth).