In a press release, the Texas based Kinder Morgan further stated that, “under current circumstances, specifically including the continued actions in opposition to the Project by the Province of British Columbia, it will not commit additional shareholder resources to the Project.”

Fierce opposition to the pipeline has come from 1st Nations, the governments of British Columbia, the city of Vancouver, Tribal Nations along the Coast Salish Sea, and Washington State.

On March 10th, Indigenous leaders erected a traditional watch-house along the Kinder Morgan pipeline route. The site has featured on-going mass demonstrations where hundreds have been arrested.

Throughout unceded Secwepemc Territory, tiny houses were constructed by water protectors to stop the construction of the Kinder Morgan Trans Mountain pipeline from crossing their territory. 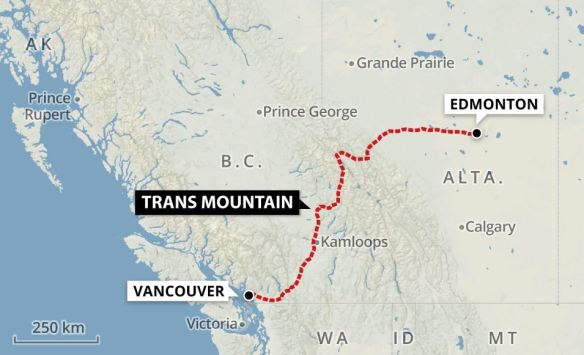 The Trans-Mountain pipeline, backed by Houston based Kinder Morgan, would transport an estimated 890,000 barrels of tar sands crude from Alberta to Buraby, BC where it would be stored for export to Asian markets. An estimated 700 supertanker trips per year would carry the crude to foreign markets.

The press release further states, “KML will consult with various stakeholders in an effort to reach agreements by May 31st that may allow the Project to proceed. The focus in those consultations will be on two principles: clarity on the path forward, particularly with respect to the ability to construct through BC; and, adequate protection of KML shareholders.”