It was in early September 2016, as bulldozers desecrated grave sites and sacred lands along the Cannonball River on the Standing Rock Sioux reservation and private security unleashed attack dogs on water protectors, that it became clear that our efforts to stop the Dakota Access pipeline through our moral, Tribal treaty rights and environmental arguments were becoming less and less effective.

Just one day before the mass desecration, the Standing Rock Sioux Tribe’s historic preservation officer handed to a judge a detailed map of where these burial sites and sacred sites were located. To Energy Transfer Partners, the Army Corp of Engineers and the State of North Dakota, the destruction of the bones of our ancestors, sacred sites, violation of Treaty rights and the contamination of our drinking water were simply not compelling enough reasons to not build the massive oil pipeline.

That said, our resistance is not in vein. Because of Standing Rock and our united front opposing the DAPL many non-indigenous peoples have been awakened to the continued repression of Native peoples at the hands of the United States government and the fossil fuel industry. While this awareness has not stopped oil from flowing through the pipeline it has expanded our resistance and diversified our tactics.

It is abundantly clear the federal, state, and local governments, as well as the oil giant Energy Transfer Partners and the banks financing the pipeline, do not care about our moral, environmental, human and Tribal rights. However, they do care about money. In this instance the old adage is true, “Money talks.” So we shift our tactics and direct energy towards getting individuals, Tribes, universities, and cities to divest from the banks, like Wells Fargo, financing the Dakota Access pipeline. 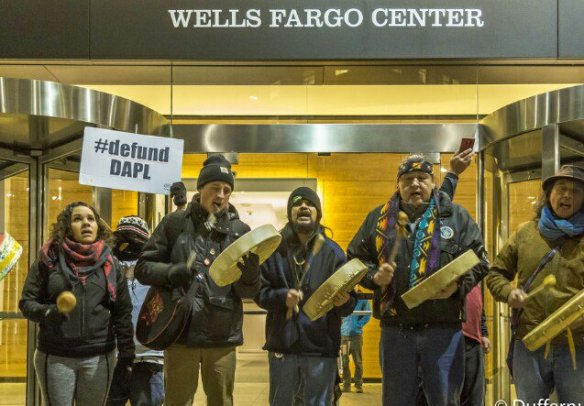 From the onset of this movement we have been clear that simply ending the cities relationship with Wells Fargo and shifting city funds to another Wall Street bank equally involved in financing the Dakota Access pipeline—as well other human, civil and environmental rights abuses, is not a victory. An effective movement for divestment is intersectional and acknowledges the relationship between problematic banking institutions and the continued oppression of indigenous, black and brown peoples both local and globally.

The Dakota Access Pipeline is not the only reason for the City of Seattle to end its relationship with Wells Fargo (and other disreputable financial institutions). Wells Fargo is a major financier of the GEO Group, a private prison company profiting off the mass incarceration of Black and brown peoples. They’ve also engaged in unscrupulous and predatory banking and lending practices targeting predominately students and low-income communities of color. 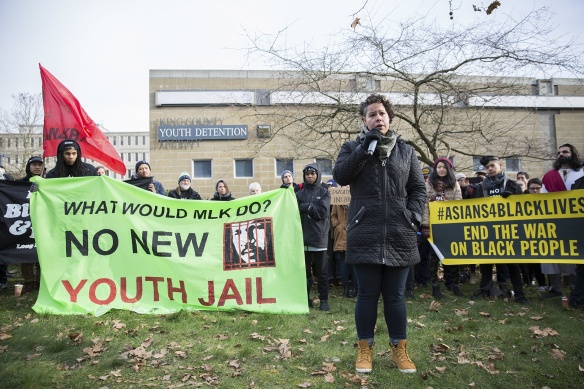 Community action to stop construction of a new youth jail in Seattle. Photo by Seattle Weekly

In February 2017, Seattle made history as the first city to divest from Wells Fargo.

The immediate question following the Seattle vote was who should Seattle bank with given other Wall Street banks are equally disreputable in their practices? The answer being the city needs to create its own municipal bank bank free of Wall Street influence where we can ensure Seattle’s money is not used to finance human rights violations, pipelines, private prisons, or immigration detention centers.

A municipal bank where we can see the City’s money, our money, re-invested into the people of Seattle; a bank where its first and primary mandate is the public interest of our city and its residents; a bank guided by and invested in the values of our “progressive” city.

A municipal bank sounds exciting, but is it even possible?

Yes, we are not the first city to consider this. It can be done and we, Seattle, are on our way to do it. This last budget session—in partnership with environmentalists, prison divestment organizers, and members of the Native and Black communities—the Seattle City Council approved $100k to complete a public bank study. The goal of this study is to investigate the feasibility of a municipal bank, the benefits, and how this shift will provide Seattle with more financial capital to address crisis such as affordability, housing, and homelessness.

This is about so much more than a publicly owned city bank. This is about our vision, our values, and, most importantly, our shared future and existence. First peoples own, occupy or use about 25 percent of the world’s surface area, and yet safeguard 80 percent of the world’s remaining biodiversity. The continued resistance of indigenous people has awakened many non-indigenous peoples’ sense and desire to live in ways that protect our natural resources and our shared human existence.

Resistance and divestment are not enough. We must also build the world we most need to see. This includes establishing shared financial institutions which, like us, also protect our natural resources and shared human existence. Our future–all of our futures–depends on it.

Nikkita Oliver is an activist, lawyer, spoken word artist and former mayoral candidate for Seattle. She is also a member of the Seattle Peoples Party. Follow at @NikkitaOliver

Matt Remle (Lakota) is an editor and writer for Last Real Indians and the author of Seattle’s ordinance to divest from Wells Fargo and the co-founder of Mazaska Talks. Follow at @wakiyan7

1. A Seattle Public Bank will be owned by the City of Seattle. It will be a depository for taxes and fees of the city and will pay the bills for the city. It will be run by experienced bankers working at civil service pay. It will have citizens, State of Washington and Federal Reserve oversight. Its mission is to insure the prosperity of Seattle is widely shared, thus strengthening our economy.

2. It will be able to loan money to build infrastructure our city needs without having to borrow from big private banks. The money that the city saves in interest and banking costs can be contributed directly to the city’s pension plan for example, resulting to increased plan funding. Or it can be used to lower taxes. The interest on loans the public bank issues would come back to the bank, allowing the city to build almost twice as much infrastructure as it does now. It keeps the money circulating locally rather than going to big private banks that can use it anywhere. And what could be safer than lending for public infrastructure?

3. Based on traditional safe banking practices for leveraging capital to make loans, a capital investment of $50 million will allow for up to $500 million in deposits and up to $375 million of loans. A Seattle public bank can further increase its capital by attracting investments from nearby cities and counties, thus making them shareholders and increasing the bank’s base for lending. If the public bank partners with our local community banks in lending for infrastructure, then the first $50 million capitalization could lead to $750 million in loans, more if the initial $50 leveraged additional public capital.

4. A Seattle public bank’s lending can have a multiplier effect by stimulating growth and opening opportunities for local business, creating thousands of good jobs. The economy of our city depends on building the infrastructure needed to compete in a global economy. It is a public bank’s job to ensure that happens.