The Navajo Tribal Utility Authority (NTUA) and its wholly-owned subsidiary NTUA Generation, Inc., will expand the Kayenta Solar generation facility, labeling it Kayenta II. The announcement was made Friday on the same day NTUA and the Phoenix-based Salt River Project (SRP) signed a long-term solar confirmation for the sale of firmed energy and the Environmental Attributes from Kayenta II along with a Memorandum of Understanding (MOU) for future energy development on the Navajo Nation. 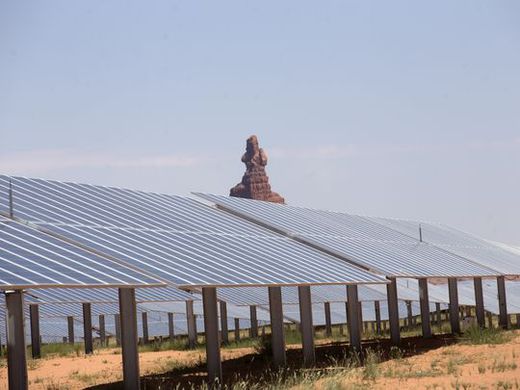 “This is a pivotal step in demonstrating the Navajo Nation’s ability to successfully develop renewable energy competitively and is an essential platform that will make it possible for SRP and NTUA to continue to pursue future development projects,” said Mark Bonsall, SRP General Manager and CEO. “Additionally, the renewable energy credits from this project will help SRP expand its renewable portfolio to further reduce carbon emissions.”

The announcement of Kayenta II coincides with the signing of a Memorandum of Understanding in which the parties commit to working together to pursue the development of additional renewable energy projects on the Navajo Nation, recognizing that the Kayenta Solar Projects are the platforms for such further ventures.

During the development of the Kayenta Solar Facility, SRP signed a two-year Energy and Environmental Attribute contract. As a result of the commitment to jointly pursue additional projects, SRP will add another year to such contract following Kayenta II reaching Commercial Operation, with options for further extensions.

“This agreement builds upon the success of Kayenta Solar and opens more doors to create new jobs and generate additional economic benefits to the Navajo Nation,” Haase said, explaining that the overall objective for both parties is to develop renewable energy projects to the benefit of Navajo communities over the next five years. “We appreciate the willingness of SRP to continue to work alongside NTUA and the Navajo Nation on renewable energy development to benefit the Navajo people.”

“In the past, energy developed on the Navajo Nation was sent away for the benefit of others,” President Russell Begaye said. “Now under this administration, Navajo has taken steps to produce energy for ourselves. The partnership between NTUA and SRP to build Kayenta Solar Facility laid the groundwork to expand toward Kayenta II. This is a healthy step for the Navajo Nation as it’s become an energy producing tribe.”

Currently, the 27.3 megawatt Kayenta Solar Project provides electricity to Navajo communities served by NTUA, generating power for an estimated 18,000 homes. At the height of construction, close to 278 people of whom 236 (85%) were of Navajo descent, worked on the project. It is expected that Kayenta II will employ a greater number of Navajo for the workforce.

“We anticipate the same economic success with Kayenta II,” Haase said. “We calculated that construction is expected to generate approximately at least $2 million in taxes to the Navajo Nation. Kayenta II promises another winning combination of more jobs and promising economic activity to the region. This partnership is all about progress.”

“We congratulate NTUA and the Navajo Nation on the expansion of their solar project to produce even more clean, renewable energy. Innovation, partnerships and adaptability are the drivers of a new energy frontier, and we are honored to partner with the Navajo Nation as they embrace these values to create a bright future,” said WAPA Administrator and CEO Mark A. Gabriel.

The Kayenta II will generate an additional 27.3 MW and will take advantage of the existing interconnect, the trained workforce, and existing site. Kayenta II is scheduled for Commercial Operation on May 1, 2019.