Since 2000, Indigenous street artist Votan Henriquez (Mayan/Nahua) has been bringing his brand of Indigenous and revolutionary influenced clothing and merchandise to all corners of Turtle Island with NSRGNTS.

LRInspire editor Matt Remle recently spoke with Votan, who describes himself as an artist, a son, a father, a husband, a sibling, a friend but most importantly a human being  about his company NSRGNTS, its products, vision and what motivated him to start the company.

Nsrgnts was started in 2000. Growing up we were influenced by our heritage, and also by the struggles our people have been facing. One of the most influential movements that took place was the Zapatista uprising in 1994.

Although we had been down with the movements of the 60s, we were born too late to have joined the American Indian movement and/or the black panther party in their heyday. We had started off as politically conscious graffiti artists.

We formed a graffiti crew called FTS (fuck the system) which was later passed down to younger family members. After visiting Chiapas the place of the Zapatista uprising, we came home anxious to blast society with the ideals of the EZLN. This movement has been the first revolt led by an almost entire group of native peoples. it is rooted in indigenous ideals, views and experiences. It blew our minds.

This is how nsrgnts was born. The term insurgentes resonated and we have used it to define all indigenous struggles collectively. As a collective we partake in telling our stories through murals, street art, social media and our clothing brand.

We have an array of products. Although our dominant products are T-shirts, we’ve produced new items such as leggings, dresses, long tanks, mugs, coin bags, stickers, pins and working on a short film documenting indigenous political street art. 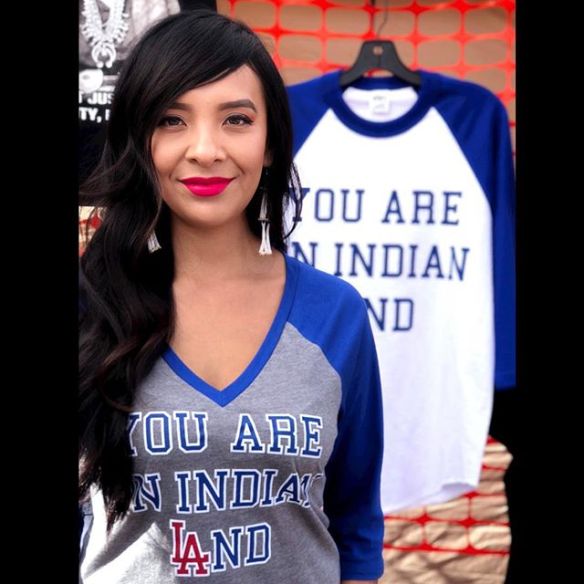 Our merchandise is available in several states across Indian country and online on our website at: www.nsrgnts.com We are also present at many pow wows throughout Indian country.

What motivated you to want to start NSRGNTS?

We were motivated by the lack of native representation. As part of the hip hop era, we rocked brands like FUBU, Karl Kani, Sean John and all that but felt like we didn’t have our own. Nowadays you see more natives carving their own lane which is exciting.

Why is it important to buy Native and support Native owned businesses?

As indigenous people we are always the last, at the bottom or non existent. When ever decision are made to wreck our homeland, profit from our culture or exploit our wisdom, we are never taken into consideration.

In a system that is capitalistic, you need funds to develop projects. In order for us to succeed, we need the support of our communities. We’ve also taken our art/brand around the world and the support is tremendous! It’s time to share Indian culture through the voice, thought, and products of native peoples.

We think it is imperative for native peoples to have an enormous presence, voice and influence in local and global politics. We and our homelands are being decimated across the hemisphere. We need to have a seat at the table of global decisions and change the course of their story to fit in sustainability for all.