Born out of the Idle No More movement, the Urban Native Era seeks to raise awareness of Indigenous issues through its apparel, film and other mediums.

Urban Native Era was founded by Joey Montoya (Lipan Apache). Joey is a designer and entrepreneur who was born and raised in the city of San Francisco. He studied advertising with a creative focus at San Jose State University. He is currently the CEO and Creative Director of Urban Native Era, an Indigenous owned and led company that is focused on spreading awareness about Indigenous issues through apparel, design, collaborations, and multimedia. 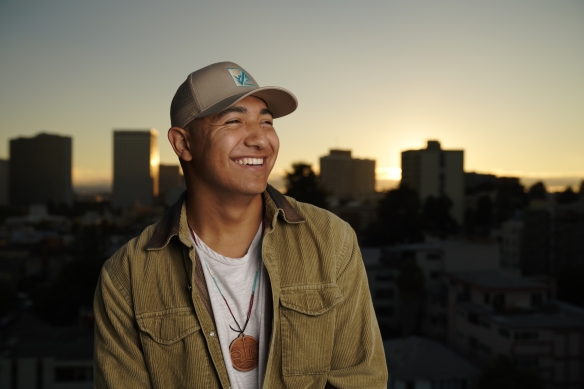 LRInspire editor Matt Remle recently spoke with Joey about his company, its origins and why it is important to support Native owned businesses.

Tell us about Urban Native Era?

Urban Native Era is a Native-owned company that focuses on spreading awareness about Indigenous Issues. We reach a wide variety of people through different forms such as design, apparel, and film. As well as being able to use collaborations and campaigns to engage with different audiences.

Every product we sell we try our best to incorporate some sort of meaning with it. We are very conscious of the way many people view us as Indigenous Peoples. With that said many of our items tell stories and breaks stereotypes in a clean stylistic way. The money for all our products allows us to continue to create, share, and reach a wide audience.

We also work on certain campaigns or certain issues in which the proceeds go towards that specific campaign or cause. Some of the recent campaigns we worked with were the Phenomenally Indigenous Campaign, where we teamed up with the Phenomenal Woman Campaign to raise awareness that, on average, Indigenous women are paid 57% of what white males are paid. The proceeds from this campaign went to the Native Voices Rising Funds.

You can find our apparel online at UrbanNativeEra.com. But feel free to follow us on Instagram, that’s where we post most of our updates about apparel.

What motivated you to want to start Urban Native Era?

My first year and semester at San Jose State University, I just turned 19 years old and I remember feeling helpless. I saw what was happening with our community, and our people, the youth and I wanted people to become educated on these issues. So that they can know, and can help, or be knowledgeable about it. Towards the end of my first semester, a movement had formed called Idle No More. For folks who do not know, Idle No More was a movement that started in Canada by Indigenous women who had enough of the infringements of their rights by the former prime minister Harper. This movement spread around the world and many Indigenous folks showed solidarity with our first Nations relatives by holding a ‘flash mob’ in a public place. So, I picked up my Nikon D3200 and went the nearest flash mob that was happening in San Jose, CA. This was the beginning of Urban Native Era and my motivation to spread awareness about Indigenous issues but through social media, design, art, film, in any way or form.

Why is it important to buy Native and support Native-owned businesses?

I truly believe money talks, in many ways and forms. If we are able to be mindful of where we spend our money this will allow us to think about where it’s actually going. When you Buy Native, you are not only buying a product, you are supporting the individual directly, their Indigenous community, and directly contributing to the success of a Native artist or entrepreneur.

As we continue to grow not only as a company, but as young Native Artists and creators we are working on how we can continue to support our Indigenous communities through outlets like design, film, and art. We really appreciate the continued support from everyone! We are really excited to continue to create and move forward.