A two day Greyhound bus ride from
Lincoln, NE to Seattle. Later, I’d
learn that the bus was called ‘the
shame train.’ I brought a comic,
a book of poems, my notebook. To
me, it was like a soul-deepening adventure
of the variety many now think is
beneath them. I made friends, rougher
men heading to Seattle too who
I hung out with, enjoyed a Moby
Dick-like camaraderie with. I was
in my 30s and had still barely left
Nebraska. I’d spent much time in
the Tibet of Indian Country but
that meant little to most. I
declined weed, dreamed out the window
in Montana, felt angels packing
my frame full, sketched, wrestled
my past, sent texts on my flip phone,
was a romantic ember glowing in the
desert dark and flying over the
yellow-striped pavement. I was
going to see a brother who had killed
me a little when he air-ballooned out
of Lincoln with his own pained
hunk of hurting and unfulfilled story.
I sought his grace, his years-later
words. I wanted to dance with him
again in one of those bars he
shouldn’t have been in that he
liked so much. I jostled along,
unashamed and innocent; I mean,
why should a man ever feel bad
about hopping on a bus and going
where love awaited him? Why
should a man ever feel bad about
that? 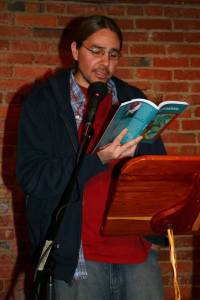 Cliff Taylor is an enrolled member of the Ponca Tribe of Nebraska. He has written a book on Native spirituality, The Memory of Souls, a book of short stories about the stand for water in Standing Rock, Standing Rock Stories, and a memoir about coming-of-age in Nebraska, Special Dogs, all of which are unpublished. His dream is to see those books in print and to use his words to help his people. He currently resides in New Orleans, where he is hard at work on his next book. Contact Cliff @tayloc00@hotmail.com