“The four legged came before the two legged. They are our older brother, we came from them. Before them, we were the root people. We came from them. We are the same thing. That is why we are spiritually related to them. We cannot say that we own the buffalo because he owns us.” ~Birgil Kills Straight Oglala Lakota

Up until 1850, the buffalo, known as the Pte Oyate to the Lakota and Dakota Nations, was the most numerous grazing animal on earth with an estimated herd size of over 50 million. Their importance to the health and of the ecosystem and to the cultural and economic centrality of Tribal Nations of the region cannot be overstated.

Prior to the colonization of the Great Plains, and the decimation of the Pte Oyate, one could find around 250 species of plants in a single location. That same location, after the introduction of cattle, is reduced to just four species. Areas where farmers mono-crop, such as wheat, you would find a single species.

To tribes of the Great Plains, the buffalo was central to their traditional economies and culture much like the salmon is for tribes in the Northwest. The buffalo provided not only a source of food, but also clothing, shelter, tools, medicines and more. Pte oyate also plays a significant role in the Lakota origin story.

During the mid-1800’s federal and settler encroachment on tribal treaty lands increased significantly. President Lincoln, a stooge for the railroad barons, signed the Homestead Act which opened up more than 90 million acres of unceded Tribal lands to the railroad companies and European colonizers for settlement.

Tribe’s resistance across the Great Plains to settler encroachment was fierce as wars broke out across both the Northern and Southern Plains.

The US found itself in costly wars. In the North, the Lakota allied with the Cheyenne and Arapaho, fought a successful war against the US, Red Clouds War 1866-1868, leading to the peace treaty of 1868, the Fort Laramie treaty. To date, it is the only treaty the United States has entered into with another Nation that it militarily lost to.

In the South, the US found itself entrenched into costly wars especially with the Comanche and Apache.

The United States sought an alternative strategy in dealing with tribes of the Great Plains and turned their attention to destroying the tribe’s central economy and food source, the buffalo.

“These men (the buffalo hunters) have done more to settle the vexed Indian question than the entire army has done in the last thirty years. They are destroying the Indians commissary. Send them powder and lead if you will, but for the sake of lasting peace let them kill skin and sell until the buffalo are exterminated. Then your prairie can be covered with speckled cattle and the festive cowboy who follows the hunter as the second forerunner of an advanced civilization.” General Philip Sheridan

Armed with powerful, long range rifles, white men descended upon the Great Plains in extraordinary numbers, estimated to be as high as 5,000 hunters. The so-called buffalo hunters were paid $3.00 per hide and $0.25 per tongue. The meat was not taken and left to rot in the sweltering heat.

Pile of buffalo skulls from 1870’s

The hunting often took place from the trains as hunters would place their rifles outside the windows of the rail cars and slaughter the buffalo.

“Every buffalo dead is an Indian gone.” Colonel Dodge

At the close of the 19th century the buffalo was brought to near extinction. Of the 50 million that once roamed the Great Plains only twenty-three remained. Twenty-three sought refuge in the remote Pelican Valley in what is now Yellowstone Park.

Their story is our story

On a recent wet and blustery Saturday afternoon, I met up with Jennifer Fuentes and her daughter Ayanna in a north Seattle coffee shop. Jennifer and Ayanna are both active with the Buffalo Field Campaign and had recently returned from its yearly “Week of Action” in Montana.

The Buffalo Field Campaign (BFC) was formed in the winter on 1996-97 by a coalition of Natives and non-Natives under the leadership of Rosalie Little Thunder (Lakota) and Michael Mease. They had come together in response to the Montana Department of Livestock slaughter of over 1,100 buffalo who had crossed the arbitrary line from Yellowstone Park onto state lands. As a result of the slaughter, over 1/3 of the buffalo herd was lost. These buffalo are the descendants of twenty-three original buffalo herd that survived and are the only continuously wild buffalo remaining.

Picture taken in West Yellowstone during BFC week of action. Jimmy Stgoddard leading us in prayers and round dance for our buffalo relatives. Photo by Jennifer Fuentes

Jennifer shares that the BFC Week of Action is a time when volunteers across the globe descend upon Yellowstone in effort to protect the buffalo, whose current population is around 3,000-5,000. During the week of action rallies are held in attempt to draw attention and educate the public to the issue of the buffalo slaughters.

Due to pressure from cattle ranchers over the “possible” threat that buffalo will pass the livestock disease brucellosis to cattle, buffalo who cross the border of Yellowstone Park face the threat of being hazed back into the park, or slaughtered.

Year round, and especially during the winter through spring months, volunteers spread out throughout the park to document both incidents of hazing and of the buffalo’s being captured for slaughter.

She tells me that cattle rancher’s claims of fearing over the transmission of brucellosis from buffalo to cattle are bogus. To date, there have been no documented incidents of a buffalo ever passing the disease to cattle. Further, many other animals like elk also carry brucellosis, but they are not subject to the same level of harassment and oversight.

The real worry cattle ranchers have is over grazing rights Jennifer tells me. Ranchers receive massive public subsidies, estimated at one billion dollars, to graze their cattle on public lands for cheap. The likes of the Koch brothers, Ted Turner, the Hilton family and the Bundy’s benefit greatly from these tax subsidies and they perceive buffalo as a threat as potential competition over grazing lands.

These billionaires profit handsomely from tax payer backed subsidies and they 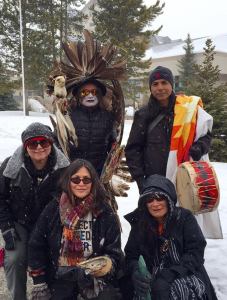 represent a powerful lobby. The result is a sham story that buffalo will pass brucellosis on to their cattle which results in the slaughter of any buffalo that leaves the confines of Yellowstone Park onto public lands.

According to John Horning, Executive Director of WildEarth Gaurdians, an “elite group of mega-rich owners has consolidated its hold on federal grazing property even further through grazing leases attached to the larger-than-life ranches they inherit or buy outright. Along with that comes all kinds of perks paid for by taxpayers: the USDA’s wildlife services, which killed four million endangered and predator species in 2013 to help livestock operators. The costly and wildly ineffective Wild Horses and Burros Program which operates to the benefit of welfare ranchers. Numerous programs that work to undo the grazing damage that welfare livestock causes. And the bank loans that an estimated 45% of public lands ranchers obtain, using their grazing leases as collateral, and which heighten the value of their primary ranching property.”

Learning of this outright slaughter after attending a BFC event is what led Jennifer to sign up as a volunteer. She recalls her first time she saw a buffalo while volunteering with the BFC, “It was sub-freezing temperatures and I strapped on my cross country skies and headed out. When I saw my first buffalo I just wept, thinking to myself you survived, you’re still here. Their story is our story.”
Ayanna fuentes, Thomas fuentes and Jennifer Fuentes. Standing on the steps of the Montana Capitol during the BFC week of action.

Ayanna fuentes, Thomas fuentes and Jennifer Fuentes. Standing on the steps of the Montana Capitol during the BFC week of action.

This year was their first year attending the week of action. During this year’s Week of Action, the BFC was invited to the Montana State capital to help celebrate the recent decision by Governor Bullock to open up an area known as Horse Butte year round to buffalo. This area is a historic birthing grounds for the buffalo. Jennifer shares how when she and Ayanna were singing a song in front of the capitol cops came running out and surrounded them. She laughs the incident off and says, “This is about healing we need to heal ourselves and saving the buffalo is the key for as the buffalo go, so do we.”