Today is the International Day of the World’s Indigenous Peoples, and I wanted to take some time to tell you what that means to me.

In January, I was proud to be sworn in, along with my friend Representative Haaland, as the first Native American woman in Congress. As a member of Ho-Chunk Nation, I am proud of my heritage.

Native Americans have made many important contributions, but our unique stories, cultures, and challenges are too often overlooked.

From our perpetual fight to expand voting rights for native people, to the high rate of mental illness and suicide within our communities, to a shocking epidemic of gendered violence against native women — Native Americans have long needed more representation in Congress to address the challenges we face.

That’s why I was so proud to co-sponsor legislation that addresses gendered violence against Native women and girls, who are targeted at far higher rates than any other female population in the country.

When the House passed the Violence Against Women Act, with my legislation attached, I was proud to sit in the Speaker’s chair and preside over the vote — only the second Native woman to do so in our history.

In that moment, I hoped that native girls across the country would see me presiding over the People’s House and know that they have a voice in our democracy.

As a Native woman, I know how to stand up and fight for equity. Now, as we recognize the International Day of the World’s Indigenous Peoples, I’m calling on our supporters to join me in demanding a vote in the Senate to pass the Violence Against Women Act and take a stand to give women — particularly Native women — the protections and resources they need in the face of domestic and sexual abuse.

Thank you for speaking up. 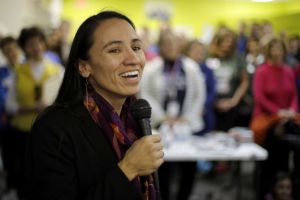 1 thought on “As a native woman by Sharice Davids”