Lummi Nation held a Sna’teng, a traditional naming ceremony, for the Southern Resident Killer Whale population on Thursday, August 22, on a beach at H’eT’atCh’L, an ancestral village site on Orcas Island. Traditional names connect family members to one another, to ancestors, to culture, and to spirit. In receiving the name Sk’aliCh’elh, the qwe’lhol’mechen (orcas) were affirmed as members of the Lummi family.

“We call the orcas qwe ‘lhol mechen, which means “our relations under the waves.” Now we can call those relations by their proper name, Sk’aliCh’elh,” said Lawrence Solomon, Secretary of Lummi Nation.

Standing as witnesses were Leonard Forsman, Chairman of Suquamish Tribe and President of the Affiliated Tribes of Northwest Indians; Chief Leah George-Wilson of Tsleil-Waututh Nation; Kevin Paul, Senator of Swinomish Tribe; and Rueben George, of Tsleil-Waututh Nation. The Chairwoman of the Tulalip Tribes was unable to attend, but sent her blessing. 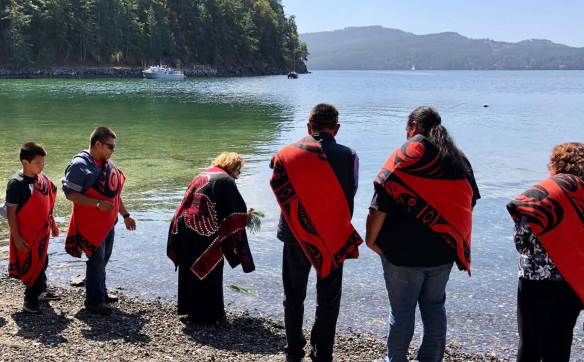 Chairman Forsman said, “The Southern Resident Killer Whales are like us: they depend on these waters for their survival, for their well-being, for food and recreation, for their spirituality as well. What they need is more salmon, more clean water, less vessel traffic. They’re asking for the same things that we’ve been asking for.”

During the summer, all three pods of resident orcas hunt for Chinook salmon in the inland Salish Sea. This summer, because of a lack of salmon, the orcas have been forced to look for food off the coast, and have made only brief appearances among the islands. On Wednesday afternoon, J, K, and L pods were spotted off San Juan Island. On Thursday morning, the naming ceremony took place in proximity to them. By Thursday afternoon, they were gone again.

“They came in for their Sna’teng,” said Raynell Morris, a Lummi elder who took part in the ceremony. “That’s what family does. That’s what we all did today, Coast Salish Tribes and First Nations. We came together as extended family for spirit and culture. Our ancestors were here with us today. Sk’aliCh’elh came home for the ceremony, but then they had to leave right after because they are hungry. Healing our waters and restoring the salmon, that’s the work we need to do now.”

Also in attendance were representatives from Congresswoman Suzan del Bene’s office, the Army Corps of Engineers, Washington Department of Fish and Wildlife, Whatcom County Council, and Seattle City Council. Present, too, were the Executive Directors of the Sierra Club, Friends of the San Juans, and Sacred Trust Initiative.