“What better way to celebrate Indigenous Peoples Day than highlighting one of the greatest examples of Native excellence?” Said Louie Gong, founder of Eighth Generation. The blanket is aptly named “All Around Excellence.”

Jim Thorpe (Sac and Fox) is an American icon famous for winning Olympic gold in the decathlon and pentathlon, before going on to excel in professional baseball and football. Jim Thorpe also became the NFL’s first president and is widely considered one of the best athletes to ever live. The “All Around Excellence” Special Edition Wool Blanket was designed by Eighth Generation in collaboration with Sac and Fox traditional ribbon artist, Ruth Garvin.

In 2015, Eighth Generation revitalized the wool blanket market by becoming the first Native-owned company to offer wool blankets, with 100% of its products designed in partnership with Native artists. Since then, the Native owned and operated company has collaborated with nearly 50 Native artists, drawing a stark contrast with the pattern of cultural appropriation established by legacy companies in the wool blanket industry. 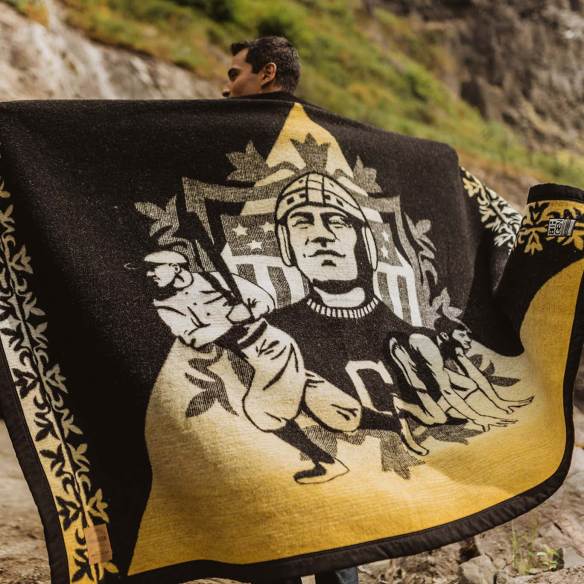 In addition to the wool blanket, Eighth Generation previously released a Special Edition Jim Thorpe Phone Case. All the phone cases are made in their Seattle studio headquarters, available in various iPhone and Samsung models. The stunning case is made with real cedar wood, maple and ash inlays, which are cut and laser etched with multiple layers of protective coating.

Eighth Generation was founded by Louie Gong in 2008 when he began customizing shoes in his living room. Now one of the fastest growing Native-owned companies in the U.S. — with a flagship store in Seattle’s iconic Pike Place Market — Eighth Generation is a proud participant in the global economy. The company provides a strong, ethical alternative to “Native-inspired” art and products through its art-centric approach and 100% Native designed products. Eighth Generation’s Inspired Natives Project, anchored by the tagline “Inspired Natives, not Native-inspired,” builds business capacity among cultural artists while addressing the economic impact of cultural appropriation.